You are here: Home / Big Picture / Parent Company of University of Phoenix Could Be Sold to Owner of McGraw-Hill Education
Listen

Apollo Education Group, parent company of the University of Phoenix as well as Apollo Global, is in “advanced talks” to be purchased by Apollo Global Management, owner of McGraw-Hill Education and of Cengage debt. Got that?

To clarify, the Apollo Education Group is the parent company of the University of Phoenix, and they have a subsidiary called Apollo Global, which is a joint venture with the Carlyle Group, another private equity firm. While the confusion is understandable, Apollo Global Management previously shared nothing in common with the Apollo Education Group other than their admiration for the choir-directing sun-god.

With that in mind, here is the news from the Wall Street Journal today:

A deal between Phoenix-based Apollo Education and Apollo Global Management, a New York private-equity firm, could be worth about $1 billion, some of the people said, with one of them adding an agreement could be reached in the next few weeks. Apollo Education had been in discussions with a number of private-equity firms since late last year, but Apollo Global Management is the only one still in the running now, this person said.

It is possible, as always, in such situations that there will be no deal, and another buyout firm could re-emerge.

This news coincided with Apollo Education Group’s announcement of its Q1 2016 earnings. To get a sense of just how far the company has declined, consider that in the earnings they stated their “cash and marketable securities were approximately $756 million and our outstanding debt was $43 million”. AGM is talking about paying $1 billion to get just over $700 million in cash and marketable securities and less than $300 million for the actual assets. The following chart shows the historical Apollo Education Group combined enrollment. 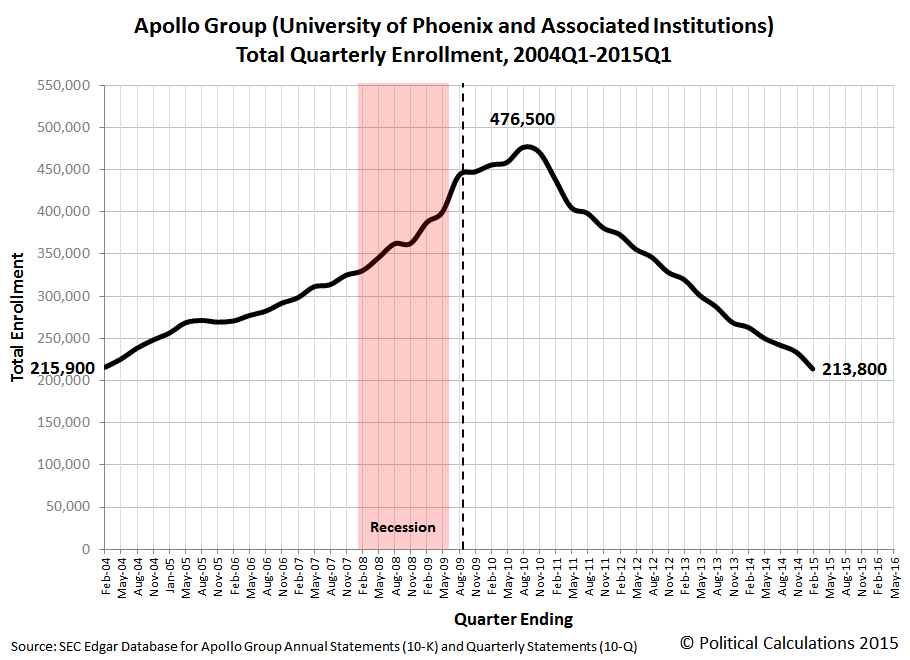 Update: The markets are taking this news well, as shares of Apollo Education Group are up 23% in after-hours trading. At the close today, the publicly-traded market cap of Apollo was just $692 million.

Later in the WSJ article:

Unstated in the article, but quite important to understand, is that AGM purchased McGraw-Hill Education for $2.5 billion in late 2012 and is trying to take that company public (which I personally doubt will happen in the near term). According to the NY Post, AGM also owns debt from Cengage Learning.

There is one other aspect to consider: the University of Phoenix is in the middle of migrating from their homegrown learning platform that cost several hundreds of millions of dollars to develop to Blackboard’s Learn Ultra. While no one has said that this agreement will change, if AGM does buy the Apollo Education Group, then there would be additional risk on this Learn Ultra migration. University of Phoenix instructors have been told about the changes, but the actual implementation with students and classes is scheduled for Summer 2016. It is quite common for acquisitions of distressed companies to lead to major strategic initiatives being put on hold until the new owners figure out what they plan to do with the company.

There is a lot of moves happening in education this year, and this potential sale will likely have bigger ramifications than just for the for-profit sector.

Update: Sorry for multiple updates, but this observation by Audrey is too good to not include.