You are here: Home / Ed Tech / The Battle for Open and MOOC Completion Rates
Listen

Yesterday I wrote a post on the 20 Million Minds blog about Martin Weller’s new book The Battle for Open: How openness won and why it doesn’t feel like victory. Exploring different aspects of open in higher education – open access, MOOCs, open education resources and open scholarship – Weller shows how far the concept of openness has come, to the point where “openness is now such a part of everyday life that it seems unworthy of comment”. If you’re interested in OER, open courses, open journals, or open research in higher education – get the book (it’s free and available in a variety of formats).

Building on the 20MM post about the ability to reuse or repurpose the book itself, I would like to expand on a story from early 2013 where I happen to play a role. I’ll mix in Weller’s description (MW) from the book with Katy Jordan’s data (KJ) and my own description (PH) from this blog post.

(MW) I will end with one small example, which pulls together many of the strands of openness. Katy Jordan is a PhD student at the OU focusing on academic networks on sites such as Academia. edu. She has studied a number of MOOCs on her own initiative to supplement the formal research training offered at the University. One of these was an infographics MOOC offered by the University of Texas. For her final visualisation project on this open course she decided to plot MOOC completion rates on an interactive graph, and blogged her results (Jordan 2013). 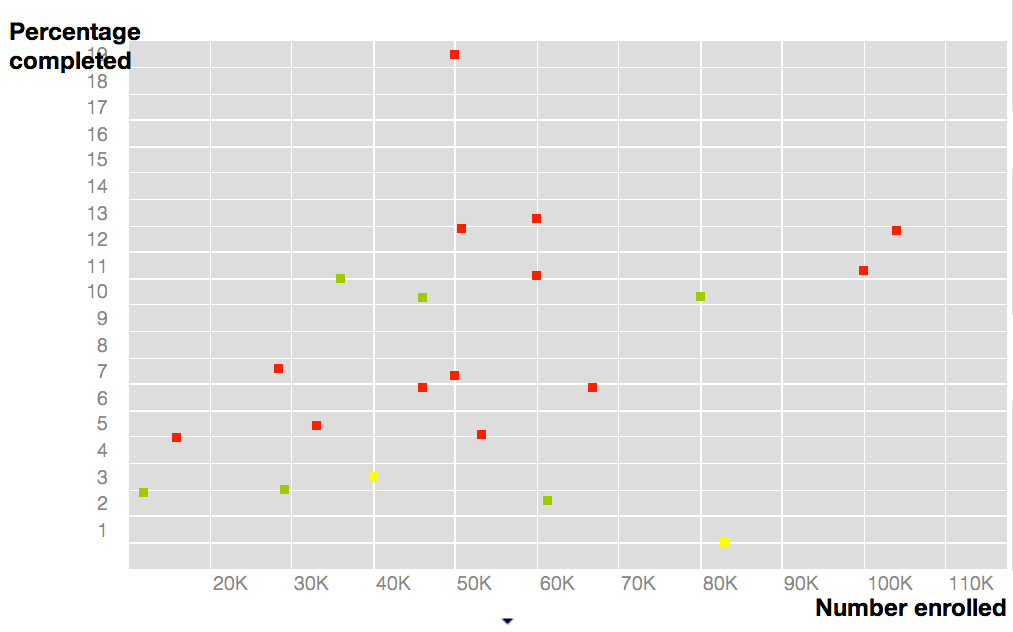 (MW) This was picked up by a prominent blogger, who wrote about it being the first real attempt to collect and compile completion data for MOOCs (Hill 2013), and he also tweeted it.

(PH) How many times have you heard the statement that ‘MOOCs have a completion rate of 10%’ or ‘MOOCs have a completion rate of less than 10%’? The meme seems to have developed a life of its own, but try to research the original claim and you might find a bunch of circular references or anecdotes of one or two courses. Will the 10% meme hold up once we get more data?

While researching this question for an upcoming post, I found an excellent resource put together by Katy Jordan, a graduate student at The Open University of the UK. In a blog post from Feb 13, 2013, Katy described a new effort of hers to synthesize MOOC completion rate data – from xMOOCs in particular and mostly from Coursera.

(MW) MOOC completion rates are a subject of much interest, and so Katy’s post went viral, and became the de-facto piece to link to on completion rates, which almost every MOOC piece references. It led to further funding through the MOOC Research Initiative and publications. All on the back of a blog post.

This small example illustrates how openness in different forms spreads out and has unexpected impact. The course needed to be open for Katy to take it; she was at liberty to share her results and did so as part of her general, open practice. The infographic and blog relies on open software and draws on openly available data that people have shared about MOOC completions, and the format of her work means others can interrogate that data and suggest new data points. The open network then spreads the message because it is open access and can be linked to and read by all.

(PH) Once I had and shared Katy’s blog post, it seemed the natural move was to build on this data. What was interesting to me was that there seemed to be different student patterns of behavior within MOOCs, leading to this initial post and culminating (for now) in a graphical view of MOOC student patterns. 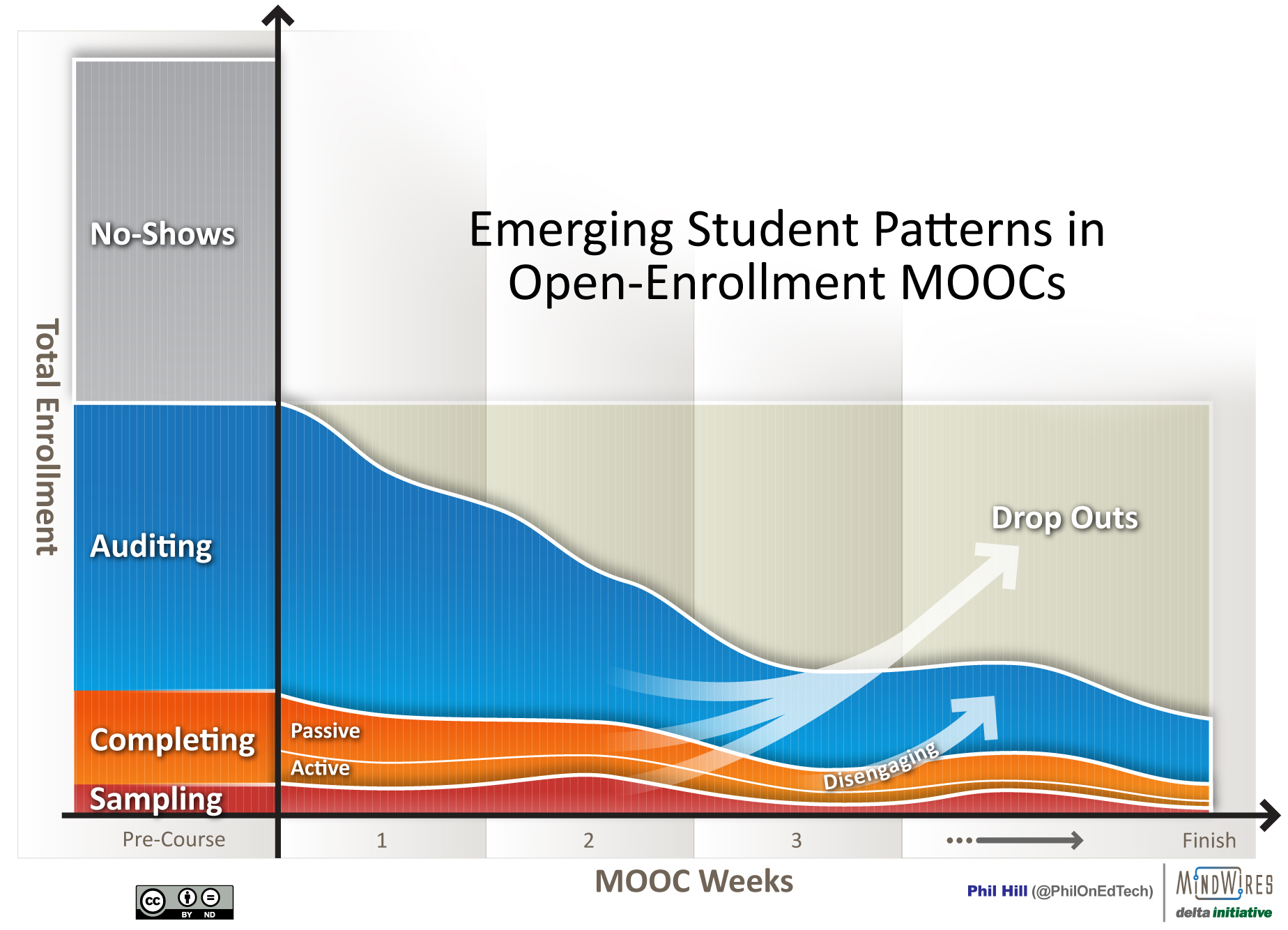 (PH) With a bit of luck or serendipity, this graphical view of patterns nicely fit together with research data from Stanford. 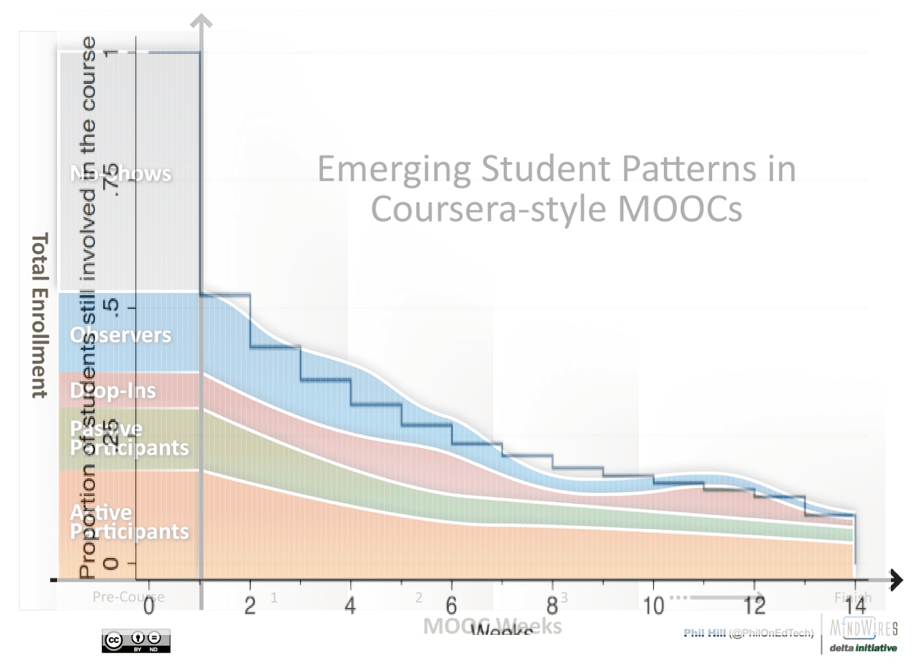 (MW) It’s hard to predict or trigger these events, but a closed approach anywhere along the chain would have prevented it. It is in the replication of small examples like this across higher education that the real value of openness lies.

Weller has a great point on the value of openness, and I appreciate the mention in the book.