I’m not sure which is more surprising – Instructure’s continued growth with no major hiccups or their competitors’ inability after a half-decade to understand and accept what is at its core a very simple strategy.

Personally, I vote for Door #1. As surprising as the competition’s seeming sense of denial is, Instructure’s performance is truly shocking. After five years, I continue to be surprised by it. It’s not just how well they are executing. It’s that they seem to defy the laws of physics in the LMS market. We had no reason to believe that any LMS company could rack up the numbers they are showing—in several different areas—no matter how well they execute.

Back in late 2010, I wrote a two–part series on LMS market share. For context, this was a year after Blackboard acquired ANGEL, a month before Instructure records its first clients on the growth graph in Phil’s previous post, six months before we wrote our first post about Instructure on e-Literate, and two years before WebCT was officially killed off. At that time, Blackboard still had dominant market share—over 50%—but it was starting to become clear for the first time that their dominance might not last forever. The posts were my attempt to figure out what might happen next. Here’s what the non-Blackboard LMS market looked like then: 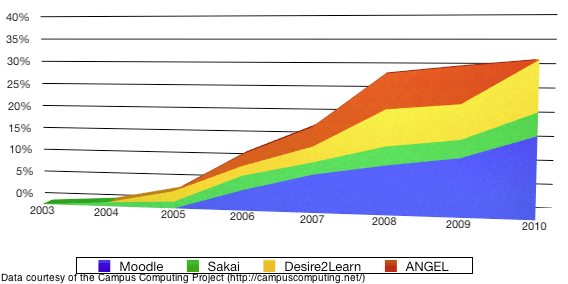 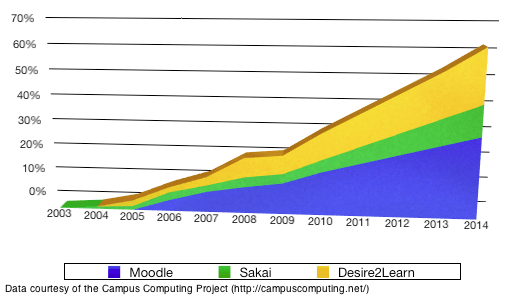 What we see here is a steady decline of Blackboard’s market share getting spread out among multiple platforms. It’s worth calling out a problem with the data that we had at that time. Campus Computing, the source of the market share information in this graph, tracks market share by company, not by platform. So we had no way of knowing how much of their market share was from their Learn platform and how much of it was from WebCT. This was crucial (or, at least, it seemed crucial at the time) because Blackboard was force-migrating WebCT customers to their Learn product. The rate at which Blackboard’s market share got distributed to other platforms depended on how much of the attrition was from WebCT CE customers, how many were WebCT Vista customers, and how many were Blackboard Learn customers. The CE customers tended to be small schools with small contracts, and Blackboard wasn’t making much of an effort to keep them. To the degree that Blackboard’s losses were confined to CE going forward, the company would do just fine. On the other hand, to the degree that Blackboard lost customers from its core Learn platform, it would be a sign of impending catastrophe. LMS migrations were so hard and painful that very few schools migrated unless they felt that they absolutely had to. CE customers left Blackboard in part because it was clear that Blackboard didn’t care about them and that they therefore would never get the quality of product and service (and pricing) that they needed. Blackboard was making a real effort to keep Vista customers, but it was an open question as to whether the forced migration would cause Vista schools to look around at other options, or whether Blackboard could keep the pain of migration low enough that it would be easier to just roll over to Learn than to move to something else. If, on the other hand, Blackboard started losing Learn contracts, it would mean that customers on their core platform felt that the pain of staying was worse than the pain of leaving. At the time, there was strong anecdotal evidence that CE customers were leaving in droves, moderate anecdotal evidence that Vista customers were preparing to leave, and little evidence that Learn customers were leaving. My sense at the time was that Blackboard would probably lose a bunch of customers through the WebCT sunset in 2012 and then the market would more or less settle back into stasis.

That’s not what happened. To begin with, Instructure roared onto the scene in 2011 and ended up stealing the lion’s share of the market share that Blackboard was leaking. But that’s not all. Take a look at the graph Josh Coates presented at the most recent Instructurecon: 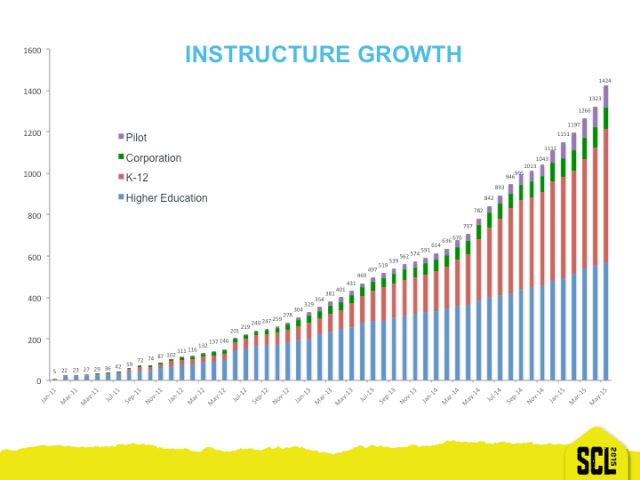 There appears to be three periods of growth here:

So Instructure’s growth has accelerated since the end of 2012, which is the opposite of what I would have expected. Where is that growth coming from? It’s hard to tell. Unfortunately, the data we have on LMS market share is not as good as one would hope. The best indications we have right now are that they are primarily coming from former Blackboard Learn and ANGEL customers. Switching data sources from Campus Computing to Edutechnica, here’s Phil’s September 2014 analysis:

But even if you assume that Instructure picked up 100% of the Learn and ANGEL customers—which is plausible, given these numbers—that’s still only 70 new customers. That’s half the ~140 new customers that Instructure is reporting. Could the rest be international? Maybe, although we have little reason to believe that to be the case. In the Edutechnica post that Phil references for the market share information, George Kroner does provide a little bit of information about Instructure’s international growth in the form of a graph of LMS market share in a few different countries:

We would need to see fully 50% of Instructure’s growth reflected in non-US markets to make the numbers square. We don’t see anything like that here. Of course, there are many other non-US markets. Maybe Canvas is all the rage in Turkmenistan. But it’s hard to square the circle. I just don’t know how to account for the company’s growth. I don’t doubt Instructure’s numbers. It’s just that there’s no way I can find to make sense of them with our current data about the market.

Beyond the numerical mystery, there seems to have been a change in market attitudes about LMS migration. Schools seem to be willing to look at alternatives even when they don’t have to. Nobody likes to migrate, of course, but a variety of factors, ranging from improved standards that make moving content easier to more technology maturity and experience among university faculty and staff, have reduced vendor lock-in. It’s a more fluid market now. I had hoped that would be the case someday but, in my heart of hearts, I really didn’t expect it. And at the moment, pretty much all of that new fluidity is flowing into Instructure—at least in US higher education.

Overall, Instructure’s growth is hard to explain. But there’s also another number that I can’t account for. I am in the process of writing an update to my post on the Glassdoor ratings of ed tech companies. At the moment, Instructure’s rating is 4.7. Out of 5. For reference, LinkedIn, which I used as context in last year’s post because it had one of the highest employee ratings on Glassdoor, currently rates only a 4.5. I have been to both Instructure’s and LinkedIn’s offices. LinkedIn’s is nicer. A lot nicer. I’m sure that their salaries are a lot higher as well. Instructure may be buoyed at the moment by the likelihood that they will have an IPO in the next year or two. But still. Instructure may be the highest rated company on Glassdoor right now, not just in ed tech, but the highest rated of any company.

Also weird is the fact that we don’t hear any major complaints from them from anywhere. People tell us stuff. Customers, former employees, and current employees come to us often to dish dirt. What we end up publishing is only the tip of the iceberg because we don’t publish anything unless we feel we have strong confirmation (which usually means multiple sources), we can protect our sources by preserving their anonymity, we believe the information is truly newsworthy, and so on. We hear a lot of dirt. But we hear very little about Instructure. When we poke around, we can get people to tell us things that they’re not happy with, but it’s all normal stuff—I really wish they had this feature, that feature doesn’t work as well as it could, the sales rep was a little annoying or a little unresponsive, and so on. And almost always, the person reporting the problem takes pains to tell us that he or she is generally happy with the company. As Phil wrote,

Companies change as they grow, and I have covered when the company lost both founders and a high-profile CTO. The company moves on, however, and I cannot find customers complaining (at least yet) that the company has changed and is ticking them off. They do have customer challenges, but so far these have been manageable challenges.

It’s not normal. And it can’t last forever. Sooner or later, gravity will assert itself and the company will start screwing up. They all do, eventually. But right now, Instructure’s performance is so good by multiple measures that it is almost literally unbelievable.